Leonid Rogozov – Auto-appendectomy in the Antarctic 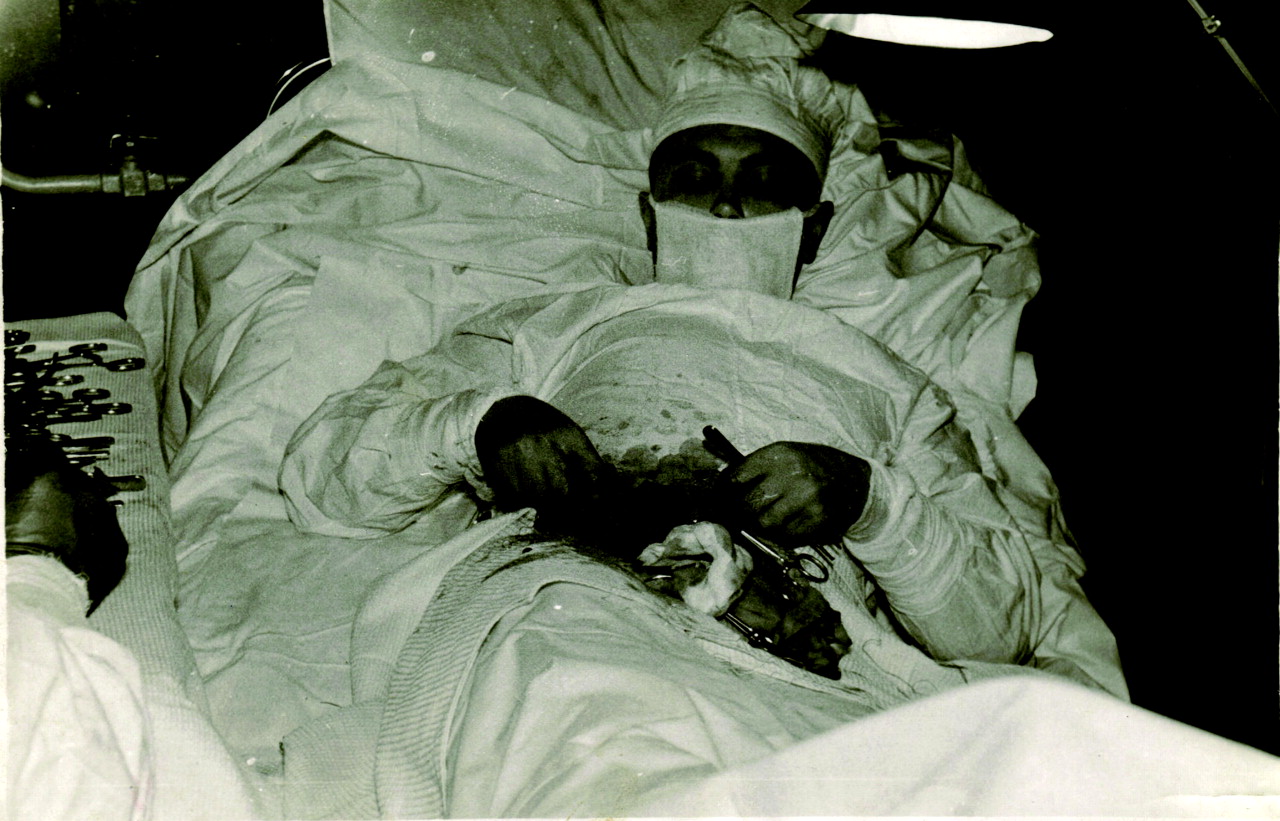 The Russian surgeon Leonid Rogozov’s self operation, undertaken without any other medical professional around, was a testament to determination and the will to life.

The operation began at 2 am local time. Rogozov first infiltrated the layers of abdominal wall with 20 ml of 0.5% procaine, using several injections. After 15 minutes he made a 10-12 cm incision. The visibility in the depth of the wound was not ideal; sometimes he had to raise his head to obtain a better view or to use the mirror, but for the most part he worked by feel. After 30-40 minutes Rogozov started to take short breaks because of general weakness and vertigo. Finally he removed the severely affected appendix. He applied antibiotics in the peritoneal cavity and closed the wound. The operation itself lasted an hour and 45 minutes. Partway through, Gerbovich called in Yuri Vereshchagin to take photographs of the operation.

“When Rogozov had made the incision and was manipulating his own innards as he removed the appendix, his intestine gurgled, which was highly unpleasant for us; it made one want to turn away, flee, not look—but I kept my head and stayed. Artemev and Teplinsky also held their places, although it later turned out they had both gone quite dizzy and were close to fainting . . . Rogozov himself was calm and focused on his work, but sweat was running down his face and he frequently asked Teplinsky to wipe his forehead . . . The operation ended at 4 am local time. By the end, Rogozov was very pale and obviously tired, but he finished everything off.”

Afterwards Rogozov showed his assistants how to wash and put away the instruments and other materials. Once everything was complete, he took sleeping tablets and lay down for a rest. The next day his temperature was 38.1°C; he described his condition as “moderately poor” but overall he felt better. He continued taking antibiotics. After four days his excretory function came back to normal and signs of localised peritonitis disappeared. After five days his temperature was normal; after a week he removed the stitches. Within two weeks he was able to return to his normal duties and to his diary.

This website uses cookies to improve your experience. We'll assume you're ok with this by staying on this page. Accept Reject Read More

This website uses cookies to improve your experience while you navigate through the website. Out of these, the cookies that are categorized as necessary are stored on your browser as they are essential for the working of basic functionalities of the website. We also use third-party cookies that help us analyze and understand how you use this website. These cookies will be stored in your browser only with your consent. You also have the option to opt-out of these cookies. But opting out of some of these cookies may affect your browsing experience.
Necessary Always Enabled
Necessary cookies are absolutely essential for the website to function properly. This category only includes cookies that ensures basic functionalities and security features of the website. These cookies do not store any personal information.
Non-necessary
Any cookies that may not be particularly necessary for the website to function and is used specifically to collect user personal data via analytics, ads, other embedded contents are termed as non-necessary cookies. It is mandatory to procure user consent prior to running these cookies on your website.
SAVE & ACCEPT